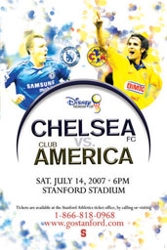 PSV Union FC had a very special guest last weekend at the US Club Soccer National Cup Tournament in Modesto. Former New York Cosmos legend Giorgio Chinaglia is involved in bringing Chelsea FC to play Club America at Stanford on July 14th and is also the host of Chelsea 'True Blue' satellite radio show on Sirius Satellite Radio. Giorgio and his producer invited me on the show today at approximately 4:30 pm. I was joined 10 minutes later by PSV Union FC 93G standout Kathryn McAuliffe who spoke about her team and the narrow loss in the U13G Regionals final this past weekend. Kat also talked about meeting Giorgio and how much of a thrill it was to have him sitting on the PSV Union bench during one of their games!

On the show we talked about the upcoming Chelsea FC game at Stanford game on July 14th and also the Los Angeles games. Co-host, former World Cup venue coordinator for New York and former general manager of New York Metrostars, Charlie Stilitano, asked me about my involvement with Right to Play and what Right to Play was all about. Chelsea FC is an official partner with Right to Play. Right to Play also partners with Adidas, which has launched its 'Red Ball' campaign and Adidas (also a Chelsea FC sponsor) and Right to Play recently signed up the brilliant, legendary Zinedine Zidane on May 23rd to support the cause. The MLS and FIFA are also announcing their partnerships with Right to Play. Between July 13 and 21st, I will be co-coordinating Right to Play coaching clinics with Chelsea FC coaches and players at UCLA and Stanford. During the Chelsea FC tour, Giorgio and comapny will run their radio show out of the Beverley Hills Hotel. Every day they will be interviewing a different Chelsea FC player.