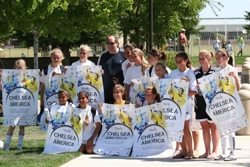 Giorgio Chinaglia is a legend among American soccer fans, first gaining fame as one of the North American Soccer League’s greatest stars in the 1970s and 1980s while with the New York Cosmos. He was a goal-scoring wizard, an ebullient personality on and off the field and was one of the significant reasons why the NASL enjoyed great acclaim during its history. Elected to the Hall of Fame in 2000, Mr. Chinaglia still ranks as the top goal scorer in the history of North American professional soccer. Mr. Chinaglia currently hosts The Football Show and The Chelsea True Blue Pregame on Sirius Satellite Radio.

Having most recently served as the Senior Vice President of Business Development for ChampionsWorld LLC, Mr. Chinaglia was instrumental in the acquisition of many key corporate partners including MasterCard and Budweiser. Mr. Chinaglia also served as the lead analyst on all of the company’s international television broadcasts.

In addition to Mr. Chinaglia’s work with ChampionsWorld, he co-hosted many of ABC’s 2002 and 2006 FIFA World Cup studio shows providing analysis for televised matches. Beginning his career in broadcasting in 1990, Mr. Chinaglia has appeared on hundreds of broadcasts across Europe for RAI International, MediaSet and Sky Sports. He has also written four books covering his life and the world of international football.

A native of Italy, Mr. Chinaglia, began his career as a professional soccer player in 1962 with Swansea FC in Wales. He later played for both Massese and Internapoli in Italy before moving to SS Lazio of Rome where he is still adored as the club’s greatest player leading them to the 1974 Scudetto, the organization’s first Italian championship. Mr. Chinaglia appeared fourteen times for the Italian National Team and was a key member of the 1974 World Cup team. In 1976, Mr. Chinaglia signed with the New York Cosmos in a landmark deal. His 242 goals in 254 appearances is still a record that is unlikely to ever be broken. He was the league’s leading scorer four times and the league most valuable player in 1981.

During his time with the Cosmos, Mr. Chinaglia also served as an executive with Warner Communications and later as the President of the Cosmos. Mr. Chinaglia returned to Italy in 1982 when he bought his former club SS Lazio and now lives in New Jersey.